wulfwalker's young female wolf-dog Wayah had seven puppies (aka cubs!!!) on 10/31. The first one was born at about 2:00 am. The rest followed that night and the following day. The puppies are really large and quite healthy now. Some more pictures of the puppies, their mother, and the pack hanging out with 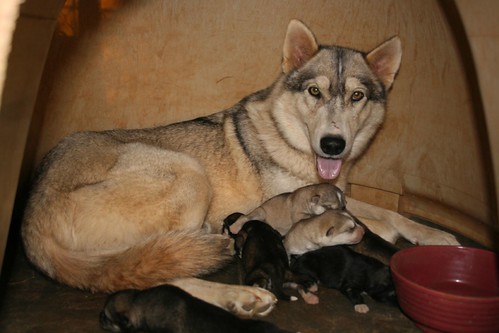 Recently I saw an e-harmony ad where the dude talked about how they match couples based on 27 areas/levels of compatibility. I wondered about that. Then I started to try and figure out what my "standards" were.

Here, in my experience is what works for me

1. Can quote from and/or recognize MP Holy Grail dialogue.

2. Will go to see Rocky Horror OR have already done so.

6. Carry on an intelligent conversation even one generated randomly from a newspaper, book, and ad, whatever.

7. Able to amuse themselves and not dependent on me to provide/think up the amusement?
(Maybe a better way to say this is.. do they have their own interests? Will they allow me to have mine? Can we find common ground/passions that we can share and take joy in doing together without feeling infringed on or resentful?

So lets see if I can sum this up..

How about you? Anything you want to add? what are your "requirements".

On a side note, a very wise friend of mine once told me that the true test of a relationship was to assemble one of those metal storage buildings. If both survived, intact and uninjured and the building was up and could be used. Oh yes, and you were still a couple.... (He also said "If there comes a time when the holes don't line up, drill a new one!")

Awkward at low levels, an unstoppable juggernaught at high levels, you are the monk. I think an honest attempt was made to make the kind of monks you always see in those awesome movies from China, but really, they came up with something pretty weird here. You are so in tune with the natural harmonies of this world that you can destroy *anything*... sure, you can hit for subdual damage, but where's the fun in that? At the end of the battle the fighter wipes his sword clean of blood and resheaths it feeling pretty hard-core... until he looks over at you and sees you standing in a pile of maimed and unconscious bodies, completely unarmed, and entriely placid-faced... Fighter: "Well fought, Brother Learned Fist! Ha ha!" *said ill-at-ease* Monk: "There, in the trees... a baby morning dove just took it's first flight while I was disembowleing this ogre with my quivering-toenail... so beautiful... or did you not notice?" Your main function in the party is to keep things a little awkward for everyone else.

This is the subtitle in a story published in People Magazine week of June 11, 2007 (article starting on page 93) under main story heading "Dog Discrimination" a story about big black dogs and how hard it is for them to be adopted. Seemingly sympathetic article about a dog rescue/adoption agency. Embedded in the story is a smaller article Titled "A Black Cat Myth" It's a very short article:

"Black dogs aren't the only critters with adoption problems. Black Cats have had their share too - especially come Halloween, when animal agencies in Waco, TX; Coeur d'Alene, Idaho; Milford, CT and other towns have banned letting people take them away from the shelters for fear the felines would be used as holiday props or, worse, sacrifices for those who practice witchcraft. That policy changed for the first time in 10 years at L.A. Animal Services, a Los Angeles pet adoption agency, where General Manager Ed Boks wrote that "little documentation of animal tortures and a growing number of cats" mandated the new guidelines. Losing up to a week of adoption time during the holiday meant that more cats had to be euthanized when no one came for them..
End of Article. There is no writers tag for this small story.

The almost nonchalant way that the information was conveyed: so factually and sparsely that shelters feared there would be animal sacrifices of black cats during Samhaim using witchcraft that they banned adoptions, I found very disturbing. first I wondered whether the towns cited above were crazy enough to actually make this policy and then put it in place. Secondly, did they use that verbage. I can just see some well meaning fundie xtians doing a "chicken little" running around afraid squawking that the wicked, evil "satanists/witches are going to sacrifice black kitties and cute little white bunnies at Hallowe'en". But it does strike me as almost a subtle reinforcement of another "manufactured urban myth" they (fundies) just keep repeating over and over ingraining in the belief system to the degree (I fear) that kids acting out or thinking it's cool perform those very acts because they have been brainwashed into believing "thats what satanists/witches do"
sooo
Comments, please.
Do you think something (if anything) should be done about this? letters to the editor, emails to the magazine, and the shelters. etc...? This is a form of discrimination.

OK...if you go to: http://www.religioustolerance.org/hallocat.htm, this is a site out of Toronto, Canada. it appears to be a very "balanced" site and I think this may be where some of the info came from. Listed
under main heading HALLOWEEN HOAXES subtitile: Ritual Abuse & Sacrifice of Black Cats.

Find the lyrics to your favorite song
2: Go to http://babelfish.altavista.com
3: Run the song through the English to Japanese translator
4: Copy it and then run it through the translator again, this time from Japanese to English.
5: Post the song (title and performer included please) along with these directions in your own journal.

It's all the same, only the names will change
Everyday it seems we're wasting away
Another place where the faces are so cold
I'd drive all night just to get back home

Sometimes I sleep, sometimes it's not for days
And the people I meet always go their separate ways
Sometimes you tell the day
By the bottle that you drink
And times when you're alone all you do is think

I walk these streets, a loaded six string on my back
I play for keeps, 'cause I might not make it back
I been everywhere, and I'm standing tall
I've seen a million faces an I've rocked them all

I have to admit when I first read this email I kneejerked hard, and got really pissed. because this is important to me and will effect me at my time of death. I am a disabled veteran of the Viet Nam era, and Gulf War I, When I calmed down and took the time to google this article (which was in the new york post not the times) I was gratified to find it a very clear straightforward reporting of the facts only. No insinuations, no colorful metaphors, no inflammatory or disparaging remarks at all. If this has hit MY pagan inbox, how many others will get this, read it and respond angrily without doing even minimal research to ascertain the truth? I am ashamed at my original reaction to this email.

On April 24, 2007, the New York Post ran a story by AP columnist Scott
Bauer, entitled Something Wicca This Way Comes, on the settlement
reached between Circle Sanctuary and the Department of Veteran's
Affairs in Circle Sanctuary v. Nicholson (case 06-C-0660-S) . This
article was accompanied by a New York Post "representation" of what
the headstones of Pagan soldiers may look like. (The representation
can be viewed at: http://www.webnik. com/post. jpg )

As I am sure you are aware, Circle Sanctuary v. Nicholson was the
result of a decade long battle between Pagan Americans and the
Department of Veteran's Affairs for inclusion of the Wiccan emblem of
faith, the Pentacle, to the list of acceptable emblems of faith for
government headstones and grave markers. According to the most recent
Department of Defense statistics, there are more than 1,800 service
men and women on active duty that identify themselves as Wiccans. This
statistic does not include Pagan veterans or those on active duty who
have decided for personal reasons not to disclose their faith.

The representation that accompanied the article by columnist Scott
Bauer did these brave souls a great injustice. Our Pagan soldiers,
just like their Christian, Muslim and Jewish counterparts, lay their
lives on the lay every day so that "journalists" such as those at the
Post can enjoy freedoms such as those that allowed them to print such
a disgusting display of ignorance and intolerance for all to see.
These soldiers deserve our appreciation and respect; not the derision
they were given by the blatant misuse of their religious symbol, the
awarding of "black hearts" and the referral to them as witches "who
knew the stakes" as was done by the New York Post on April 24, 2007.

"The editors of the New York Post and Scott Bauer would do well to
research their facts before besmirching another person's religious
beliefs. I can guarantee if someone had done something like this with
another faith's symbol, it would hit the news like gangbusters. There
simply must be an end to such ignorance and intolerance. Let our
warriors rest in peace with the honor and respect that their service
to this country demands" Laura Roberts, founder Pagans United.

Pagans United would like to encourage all of our brothers and sisters
to stand up for our service men and woman and tell the New York Post
that such ignorance will not be tolerated and that an apology to Pagan
soldiers is owed by the Post. Letters to the editors can be sent
directly to the post by sending an email to: letters@NYPOST. com

The New York Post should be deeply ashamed of the disgusting display
of hatred and ignorance this "representation" showed. Editors of the
Post owe our Pagan service men and women a heartfelt apology and
should retract this awful representation immediately.

Furthermore, it should be noted by the New York Post that members of
Pagans United and the greater Pagan community will no longer tolerate
such ignorance by "journalists" of any stripe and will honor their
service men and women by standing up for their rights and respect when
people such as those at the New York Post make such shameful and
degrading decisions.

"Life is not measured by the number of breaths we take, but rather by those moments that take our breath away."

"All Gave Some,,, Some Gave all, and for those who have fought for it,, Freedom has a flavor the protected will never know."

"We sleep safe in our beds because rough men stand ready in the night to visit violence on those who would do us harm!"
~ George Orwell

Hi, my name is Wulfwalker, and I am a book junkie...
going through my "craft" bookshelves the other night looking for one I STILL cannot find, I discovered some I forgot/phased out I had.

"To Ride a Silver Broomstick" - $RW
"The Wicca Spellbook - Gerina Dunwich
"Power of the Witch" - Laurie Cabot
"The Witch's Handbook..A Field Guide to Magic" - Rachel Dickinson, (
...and the grand prize winner, one which my beloved snatched and has yet to return.....
"The Nocturnicon" - Konstantinos (IMO dangerous keep away from newbies/bunnies crap)

...and for your reading pleasure I include the review currently posted on Amazon about the above....Enjoy!!!


Soooo..... (she says in her Best pirate voice)
What's on YOUR bookshelf?

Wicca is nicely summed up in the U.S. Army Chaplain's Handbook: Religious Requirements and Practices of Certain Selected Groups. It can be ordered from the following address and I have referenced the section on Wicca below.

***Note, currently ALL pagan traditions/practices seem to have been lumped under the heading of "Wicca" those of us who have served in the military and on Active duty have tried to have the umbrella word changed from "Wicca" to "Pagan"*******